She was funeralized this past Saturday morning at Postell’s Mortuary in Orlando. She is being interred today alongside my father at the US Department of Veteran Affairs Florida National Cemetery, which is located at 6502 SW 102nd Avenue, Bushnell, FL 33513.

The following is her Obituary:

Leona was the first of four children born to Chester and Elizabeth Johnson in Grand Rapids, Michigan in the midst of the Great Depression on December 12th in 1933. As a young child, she would walk along the railroad tracks collecting coal to help heat their family home. These humble beginnings helped to create a strong young lady that would later grow into an an even stronger woman, wife, mother and grandmother.

Upon becoming an adult she moved from Grand Rapids, Michigan to Detroit where she soon met and married Artis Glover. Together they had three sons.

Leona initially worked as a domestic until at the age of 32 she entered a skills training program where she learned various office skills. Subsequently she began working as a general office worker with the City of Detroit. Her new skills and job sparked an interest in furthering her education, which led to an Associate Degree from Shaw University’s Detroit Campus, a BSW and ultimately a MSW (Masters of Social Work) in 1978 from Wayne State University in Detroit, Michigan. Leona was actually only a few credits shy from earning a PhD, before she decided she had enough education.

As a Social Worker with the City of Detroit for over twenty years, she helped hundreds of families and individuals. While there, she also met many co-workers who became steadfast friends, which she fondly communicated with frequently until her last days.

As a sister, wife, mother, mother-in-law and grandmother, she was the foundation of her family, where she cooked many a meal, counseled troubled hearts and participated in many discussions as an active listener or doling out nuggets of wisdoms. Whatever assistance was needed, whether it be spiritual, emotional or financial, she gave and gave and gave to her family.

Spiritually, Leona came to Christ at an early age. Along with her husband, she was a founding member of Faith Temple CME Church in Detroit, Michigan, where she hosted meetings and services in her home on Russell Street. Upon retirement and moving to Orlando, Florida, she joined Mt. Pleasant Missionary Baptist Church where she regularly attended services and participated in the church’s senior group, “The Silver Angels” until her health prevented her from doing little more than being listed amongst the sick and shut-in.

Leona leaves her precious memories with her three sons, Chester A. Glover, Everett E. Glover and Darryl E. Glover; her daughters-in-law, Mae Glover and Laura Glover; her grandson Dr. Darryl E. Glover, Jr. along with his wife Adeola; her granddaughter, Michelle Leona Hall and her husband Andre; her two great grandchildren, Morgan Elizabeth Hall and Ariyo Elijah Glover; and a host of other relatives and dear friends. 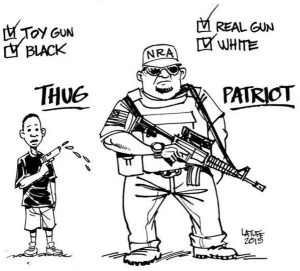 Few Presidents, if any, besides Abraham Lincoln (American Civil War) and Lyndon Johnson (simultaneous riots in over 100 cities following MLK’s assassination in 1968) have had to deal with major civil unrest on the US mainland. It has become clear to this writer, that some White Nationalist Extremists (aka Alt-Right, White Supremacist, KKK) in this country could feel emboldened by a Trump Presidency to start acting on their impulses to “take their country back” through violent means. What is not so clear is the actual number of the individuals that would participate in this folly. Based on what I see on the daily news, the number of people that are at least sympathetic to this movement may be larger than anyone should be comfortable with.

Surely it’s not the same as the 35-40% of our nation that may vote for Trump (40-50 million est). I can rationalize many that will cast a Republican Presidential ballot in 2016 will do so because of their thoughts on balance of the Supreme Court. If I were a Conservative, I would be tempted to do so as well, as these appointments are for life and will probably have consequential meaning long after Trump and many of the rest of us are gone. But in the interim and immediate future, I fear the amount of bloodshed that could come to our streets.

We’re actually well into stage one for the Nationalist Extremists, which is Separateness. Just look at the NC bathroom law. Six other states have or are considering similar bills. What makes you so sure the Extremist will stop with the bathroom laws affecting the LGBT community? This is all being done in the open without violence (so far) and we’re taking it in stride as just noise – another meaningless news story that has little affect on anything. In terms of their priorities, I suspect something either affecting Muslim Americans (Banning travel to or from their homelands) or Latinos (Mass Deportations disguised as Immigration Reform) will be their next target. They’re already in the process of escalating and justify the shooting of African Americans, which we’ve responded by walking around with cute little hand made signs that say “Black Lives Matter”. We’re the proverbial crabs in the boiling pot. Remember, based on polling, Trump’s rhetoric was seemingly fine until he said something bad about Nancy O’Dell – a white woman with blonde hair.

Even though I’m basically a very optimistic (glass half full) type, I do fear the actions of Extremists that are incapable of rationally processing their ability to coexist with people that are simply different. Furthermore, these White Nationalist have and are continuing to arm themselves to unprecedented and rideculous levels. Plus, Trump has repeatedly tweeted and said things like, “… maybe the second amendment people can do something …” This is damn near daring people with guns to use them and not for hunting dinner.

Using a few assumptions and some statistical data, we could estimate what the number of people could be that would initially join in and use violence to “take it back” and “make it great again”. A few of us would fight back and soon afterwards “mob mentality” would prevail and the number of clashes would ballon exponentially. And don’t forget these Extremists are armed with a countless number of weapons easily modified to become military grade (full auto).

We saw what one guy alone can do at the Pulse Nightclub, which catered to the LGBT community in Orlando, Florida earlier this year. Imagine these incidents being coordinated on a large scale via Twitter or FB and happening every night by groups of men for just a few weeks in places catering to the many different ethnic and societal groups, which such people are seemingly offended. Our large Sunday church services, concerts and latest black movie openings to name a few, could be fertile killing ground for such people. This could escalate quickly beyond comprehension. In time it would be called what it is – Genocide. It’s been happening in many other countries to minority groups for years. Are you so sure it can not happen here too?

1,000 people is less than two-thousandths of one percent of that estimated 50 million. That’s 0.002%. By any measure a very, very small number until you multiply it by each person doing what the Pulse Nightclub shooter did – shooting 100 and killing 50. Then it’s 100,000 shot and 50,000 dead. Then multiply this happening every day by just three weeks. That’s over a million deceased. Genocide.

Our country, our families, our homes and our lives as we know it today could change drastically in little to no time at all. And who would black folks turn to? The police? Well, we are kind of in the process of burning that bridge, aren’t we?

This is real folks. Go vote! We need a record victory this election to make a statement that such thinking only exists in the most minute fringes and has no place in the mainstream.

And by the way, even if or when Trump loses, which will hopefully happen in a couple weeks, these folks will still be out there waiting for their opportunity to knock. Be sure making friends with people different than you becomes a part of your daily routine. At some point, this may make all the difference in the world. Otherwise, when their opportunity knocks …

P.S. Let’s not condone anything in the BLM movement which can exasperate the situation any further. Despite what is and has happened, our end game should be for law enforcement to truly protect and serve us all. We need to be building and not burning bridges.

@DEFCONWSALERTS ccos of course they are.
#AlertTheDaycareStaff.
Patient off his meds again.